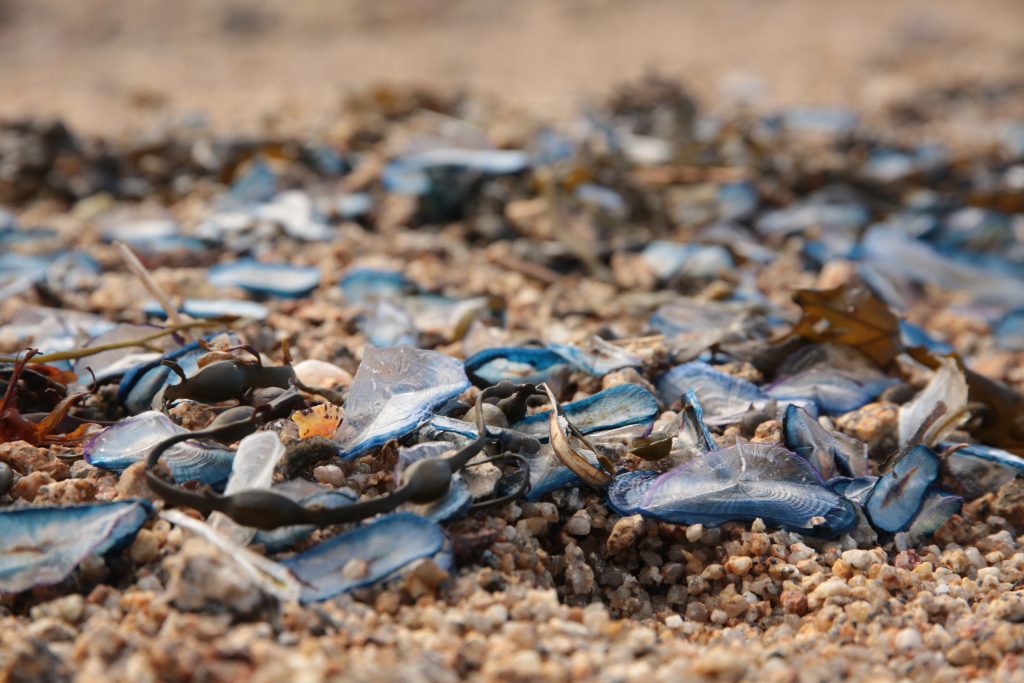 This summer the UK’s west coast has seen unusually large strandings, or “wrecks”, of marine creatures much more at home in the deep ocean and tropical or sub-tropical in origin.

With posts appearing across social media from the Isles of Scilly in Cornwall to County’s Kerry, Clare and Donegal in Ireland right the way through to Traigh Eais and Barra in Scotland. Beach Wombles (as many regular beach combers and beach cleaners are known) have been sharing their excitement, and concern, at the unusual finds.

Excitement as these ocean drifters are a treat to behold; concern as their appearance is indicative of changes occurring in our oceans and global climate.

You may have heard of one, or all the three, of the species I’m referring to; Portuguese Man-of-war, By-the-wind-sailors and Violet Sea Snails. Intricately linked, fascinating and in the case of the Man-of-war, in my view, much maligned and misunderstood.

These visitors to our shores have become caught up in ocean currents and been blown off course. They are reaching the end of their journeys, and their incredible pelagic lives; let me share some of the mind-blowing things I’ve discovered about them during my lifetime of “wombling” my local beaches.

Portuguese Man-of-war (Physalia physalis) have a fearsome reputation. Heralded by the media as “deadly” and “terrifying”, described as arriving “en masse” or “invading” and often incorrectly identified as jellyfish. These beautiful creatures definitely command respect, but they really shouldn’t be feared. Yes, they can be dangerous, and their stings can be fatal in some situations, but the more you know about them the better.

As previously mentioned the Man-of-war isn’t a jellyfish, it’s what is known as a siphonophore; and this means that a single Man-of-war is not even an “it” but a “they”!

A siphonophore is a colony of specialised, genetically identical, individuals, called zooids. The zooids, or clones, take various forms and perform specific tasks; as the siphonophore grows the zooids stay connected and working together. The Man-of-war has four specialised parts (or polyps), responsible for floating, capturing prey, feeding and reproduction.

Easily recognised by a blue, violet or pink balloon-like float, which provides the Man-of-war with their main source of propulsion; acting like a sail. The float may project either to the left or to the right; the left-handed forms sail to the right of the wind and vice versa. This means that if the sailing angle of one form leads to its stranding on the shore, the others (sailing to the opposite side of the wind) may escape. The gas-filled float can also be deflated to escape surface predators.

The bits underneath the float are often the most feared, but it’s not all tentacles down there; alongside the tentacles there are both digestive and reproductive polyps. The tentacles themselves can reach up to 165 feet in length, but an average of about 30 feet is more common.

To see a Man-of-war adrift, sailing in its natural environment, is a real treat. Sadly, those who are lucky enough to see them will likely only ever view these ocean marvels “wrecked” along our coastlines, when the winds and currents haven’t been in their favour.

Their common name is a bit of a mouthful, so they are often referred to as just Velella. Velella are a striking blue colour, but rapidly lose this on stranding and very quickly turn white, becoming thin and papery in texture. Often mistaken by inexperienced beachcleaners as plastic, to be removed from the beach.

Each Velella has short, blue-purple tentacles (reaching a maximum of 1cm in length), used to sting and capture prey. Their tentacles also act much like a keel on a boat, helping to keep the Velella upright on the surface of the ocean.

Similar to the Man-of-War, Velella come in left and right-handed forms with their sails dictating their direction of travel. Unlike the Man-of-war, Velella do not pose a threat to humans.

As the Velella and Man-of-war travel in the same fashion and hail from similar ocean locations, they can often be found stranding together and if they are washing ashore their nemesis won’t be far behind.

That’s right!  Both the Man-of-war and the Velella are “stalked” through the oceans by a surprising predator.

The Violet Sea Snail (Janthina janthina) is perhaps an unlikely foe for two nomadic, pelagic creatures that have stinging tentacles. But this beautiful sea snail, violet in colour as its name suggests, has some tricks of its own, making it highly mobile.

The Violet Sea Snail is also known as the Bubble Raft Snail, which gives a clue to its mode of travel. Using secretions of mucous the Violet Sea Snail traps and stabilises air bubbles, creating a raft, which keeps the snail suspended from the surface of the ocean and acts like a small sail.

The shell of the Violet Sea Snail is light, thin and fragile (much like the shell of a Garden Snail) allowing it to float attached to its bubble raft; if the snail loses hold of its raft it will sink to the bottom and die.

Those that successfully remain adrift with their bubble rafts rely on the ocean currents to take them to their food source; feeding on jellyfish, Portuguese Man-of-war and By-the-wind-sailors. The Violet Sea Snail is immune to the nematocysts (stinging cells) feared by many others.

If you’re heading to the beach anytime soon, just take a moment to pause, look around, watch the ocean; you never know what you might find. Our ocean invertebrates are fascinating and surprising in equal measure and with changes in ocean currents, weather patterns and temperatures we are likely to see more strange creatures stranding on our shores.