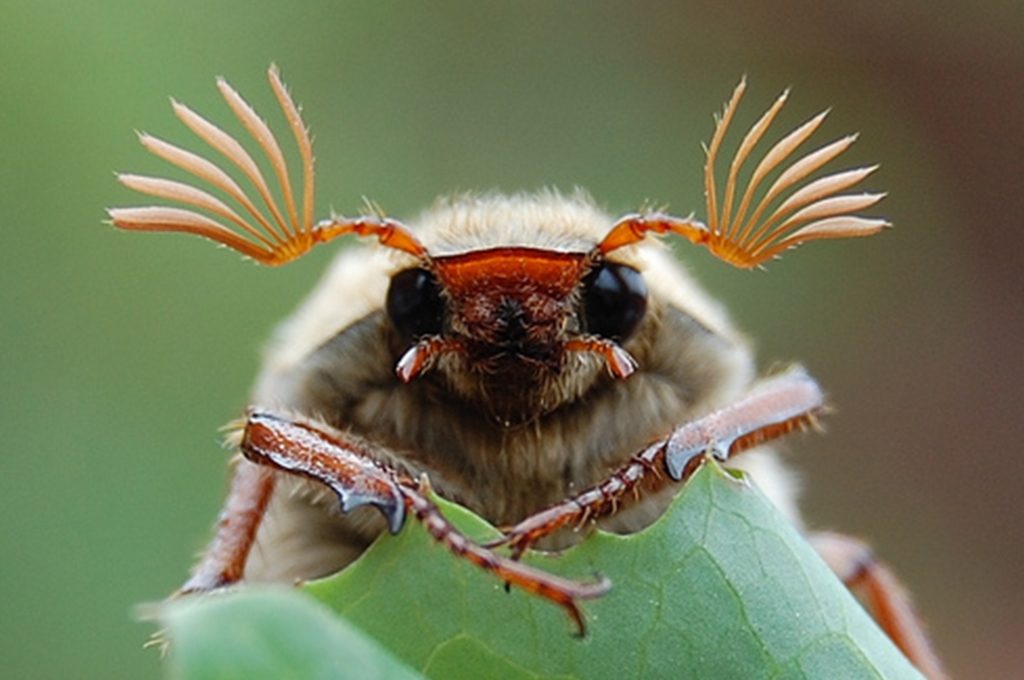 Yesterday, I saw my first maybug of the year. Regular as clockwork, these large flying beetles appear in late April or early May. The Maybug is an unmistakeable beast, with a grooved, brown bullet-shaped body and impressive tufted antennae looking like little leafy antlers.

The maybug goes by a number of different names, to entomologists it is Melolontha melolontha, to lots of people it is the cockchafer. A local name in East Anglia is the Billy Witch, and Devon names for the maybug that I have come across include rookworm and snartlegog.

Rookworm probably refers to the maybug larvae which are eaten by crows and rooks. The white grub-like larvae live underground and feed upon the roots of grasses and other plants. They can spend up to 3 years underground before emerging as adults in the spring.

Adult Maybugs tend to be active towards dusk and are attracted to lights and lit windows – the artificial light can confuse the beetles and they often collide into windows with a buzz and a clatter.
And those wonderful antennae! Those wonderful leafy antennae can detect airborne chemical signals, or pheromones, enabling males to find females even in the dark! The antennae also help us to tell male maybugs from the females – by counting the number of ‘leaves on their antennae. Males sport seven ‘leaves’ while females have only six.

Female maybugs also have a point at the end of their abdomen, this is not a sting, but a pygidium – used when laying eggs, to push them deep into the soil.

Before the advent of widespread pesticide use, maybugs were very much more common, emerging in huge numbers, and those grub-like larvae causing damage to agricultural crops.

In a wonderfully medieval method of pest control, during 1320, maybugs were taken to court in Avignon in France! The beetles were sentenced to exile ordered to leave town and relocate to a specially designated area of woodland. All cockchafers who failed to comply were collected and killed!

Widespread pesticide use in the mid 20th Century almost obliterated maybugs in many parts of the UK. Thankfully they have been making a come-back since the 1980’s with better regulation of pesticides and their use.

With their relatively large size and buzzing, somewhat bumbling, flight maybugs can cause alarm. But they are completely harmless. And once you get to know them, they are rather interesting. What do you call them? Maybugs, cockchafers, even snartlegogs? Perhaps something else? Please let us know!