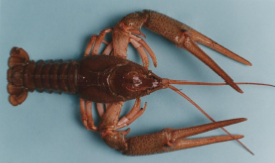 Invasive species are one of the biggest threats to UK biodiversity. There are laws to prevent the release of non-resident species and laws that regulate the import, export, trade, keeping and use of live specimens of certain particularly high risk species. Biosecurity crimes rarely make the headlines, but in 2020 goings-on during the filming of ‘I’m A Celebrity Get Me Out of Here’ by ITV (and their production company Lifted Entertainment) brought this area of wildlife crime into the public eye.

Concerns were initially raised online in November 2020 by viewers, including wildlife presenter Iolo Williams, who observed buckets of animals, including blow-fly larvae, meal worms and cockroaches being flung around the filming set, located in the North Wales countryside next to the Gwrych Castle woods SSSI, in such huge numbers and with such gay abandon that they would be likely to escape into the wild, in contravention of the Wildlife and Countryside Act 1981. As a result of complaints the North Wales Police investigated and issued “suitable advice to the production team regarding their set management and biosecurity”. An ‘I’m A Celebrity…’ spokesman defended the programme stating that “All of the insects used on I’m A Celebrity are non-invasive species”.

However, a more detailed analysis of footage by the charity Buglife found that the TV programme had used Narrow-clawed crayfish in an episode; a highly invasive crustacean that damages aquatic ecosystems. It is strictly controlled, being listed as an invasive non-native species under the Wildlife and Countryside Act 1981 and covered by the Prohibition of Keeping of Live Fish (Crayfish) Order 1996. Further investigation by Buglife uncovered initial confusion about who should be responsible for enforcing the multiple layers of legislation, particularly regarding the attribution of activities and responsibilities between England and Wales. It transpired that the Centre for Environment, Fisheries and Aquaculture Science (Cefas) was the lead authority and the information sparked a significant, and ongoing, investigation.

The investigation tracked the crayfish back to their initial trapping from a population of the invasive animal established in the wild in the UK, through a number of hands, until they were disposed of after use in the show. It was established that no licence was held for the use, indeed ‘entertainment’ is not a licensable activity. While it was clear a crime had been committed, as a non-indictable offence Cefas decided not to prosecute, as explained by Cefas Senior Fish Health Inspector Jon Hulland “The Defra enforcement policy, which we apply, typically follows a three strikes approach, other than for very serious/high impact/absolute offences….. In this case it is our considered opinion that the offence committed by the parties involved in the I’m a celebrity incident did not warrant us setting aside this policy, so we have educated the persons involved and issued warning letters, as the appropriate course of action in respect of the offences committed. Given the nature and scale of the offence we do not think that it warranted referral for prosecution, and we do not anticipate that those involved are likely to repeat the offence.” The individual, who has not been named by the authorities, judged to be the ‘keeper’ of the crayfish during filming was the recipient of a warning.

To ensure no repeat of the events of 2020 the Welsh Government convened a meeting between the production company, Lifted Entertainment, Natural Resources Wales (NRW) and Cefas on the 27th October 2021, at which the licencing requirements and legal framework were explained: including the Wildlife and Countryside Act 1981, the Invasive Alien Species Regulation 2014, the Invasive Alien Species (Enforcement & Permitting) Order 2014, the Import of Live Fish (England and Wales) Act 1980 and the Prohibition of Keeping of Live Fish (Crayfish) Order 1996.
Sian Williams, NRW Head of Operations in North West Wales, said: “In the months ahead of filming I’m a Celebrity, we have been advising ITV in relation to protecting bats as both the notified feature of the adjacent Llanddulas Limestone and Gwrych Castle Wood Site of Special Scientific Interest (SSSI) and as a European protected species….We have also discussed non-native species and biosecurity issues with ITV to safeguard the local environment….No licence applications have been received from ITV in relation to non-natives as part of their production of I’m a Celebrity to date.”

In the words of Buglife CEO Matt Shardlow, ‘Invasive species cause billions of pounds worth of damage every year, preventing that ecosystem destruction is a high priority, so it is essential that people working with animals and biological material are aware of their legal and moral responsibilities. We are disappointed that the flagrant disregard for biosecurity paraded on the nation’s TVs during ‘I’m a celebrity….’ in 2020 did not result in a prosecution and conviction, it appears that when it comes to environmental crime ignorance is an excuse’’.