The introduction of the EU Urban Waste Water Treatment Directive in 1991 and the Water Framework Directive in 2000 came too late for the striking Orange-spotted emerald dragonfly, but they introduced tough new standards, protections, and investment which might have saved it from extinction. Fast forward 18 years and these protections for our rivers and streams are under threat. 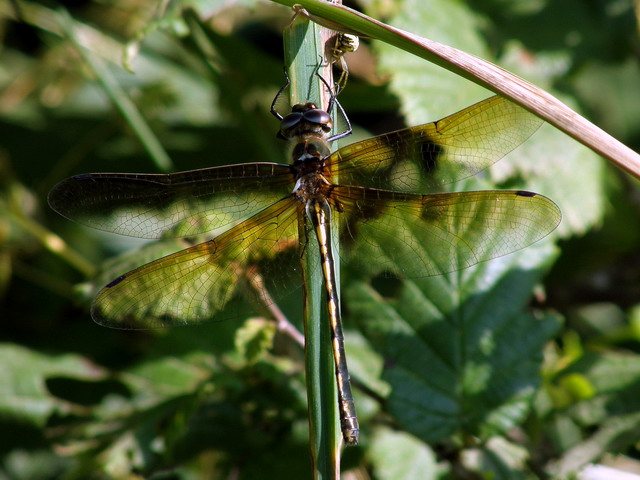 When I was growing up in the 1970s and 1980s the UK was regularly referred to as the dirty man of Europe. I remember the images of pipes spewing untreated sewage in to our rivers, and beaches strewn with sewage related debris. School history lessons told tales of ‘Gardyloo’ and sewage flowing down the streets in medieval Edinburgh. Geography explained that rivers conveyed sewage swiftly and efficiently to the sea, and taught us the maxim that ‘dilution is the solution to pollution’. Sadly, the teachers failed to tell me the tragic tale of the Orange-spotted emerald dragonfly.

First described from near Bournemouth in 1834, the Orange-spotted emerald (Oxygastra curtisii) is a striking insect, with bright green eyes and orange elongated spots along the length of its slender bronzy-green body. For just over 100 years it was found in the Moors River in Hampshire and the Tamar in Cornwall. It was last seen on the Moors River in 1963, but following pollution of the river the Orange-spotted emerald no longer flits along the rivers of southern England. It was formally declared extinct in the UK in 2008.

The introduction of the EU Urban Waste Water Treatment Directive in 1991 and the Water Framework Directive in 2000 came too late for the Orange-spotted emerald, but they introduced tough new standards and protections, and have lead to increased investment in sewerage infrastructure which might have saved it from extinction.

Fast forward 18 years and these protections for our rivers and streams are under threat. A review of the Water Framework Directive is underway across Europe which could lead to the watering down of the tough standards that have forced member states to clean up their rivers.

The need to maintain these protections has never been more urgent. Almost nine out of ten rivers in England are failing to achieve good ecological quality. Two-thirds of checks on invertebrates failed due to water quality issues, with more than one serious pollution incident per week.

New pollutants continue to emerge all the time. Microplastics are almost ubiquitous in our rivers with the River Tame near Manchester one of the most contaminated rivers in the world and microplastics were found in half of all invertebrates samples taken in Welsh rivers.

Pesticides from farming also pose an acute risk to freshwater ecosystems. The impact of neonicotinoid pesticides is particularly worrying with half of all sites monitored in England exceeding chronic pollution limits.

We need our Governments to use the strong standards in the Water Framework Directive to drive improvements in our water environment, to protect our waters and the wildlife that relies upon them. But more than that we must guard against any weakening of the standards. Regardless of the outcome of the Brexit deal-brokering we need to make sure that we retain strong protections for the water environment because if they are weakened now they are unlikely to be strengthened again in the future.