The Critically Endangered Spiky yellow woodlouse (Pseudolaureola atlantica), only found on St Helena, has been found to be fluorescent under ultraviolet (UV) light.

This iconic invertebrate has a striking appearance and a tendency to live above ground on trees and ferns; this most recent finding is yet another unusual trait for such an unusual creature. To date only one other woodlouse has been reported to glow under UV. Glowing under UV is more commonly known in scorpions, and the reason why these woodlice glow is currently a mystery.

As well as being an interesting trait, this finding has had positive practical benefits too. The Spiky is difficult to spot against the fern fronds they generally live on, but they become much more visible with the UV torch. Simple searches with the UV torch have already found Spikies in new locations, and detected far more individuals where they were already known to be, giving a much better idea of their distribution and true population numbers. As many as 57 individuals have been counted in a 5 minute search, an astonishing number for a species whose population was originally thought to number 50 in its entirety. Individuals have also been seen on unexpected plant species, including non-natives such as whiteweed and bramble.

Although these findings are positive news for this Critically Endangered species, it is not out of the woods yet. Numbers are good in a few small patches, but in other areas of seemingly suitable habitat they are still very rare. We need to monitor populations to determine long term trends and more work is needed to find out how we can support the specific requirements, and manage the threats, of this fascinating and valuable species. 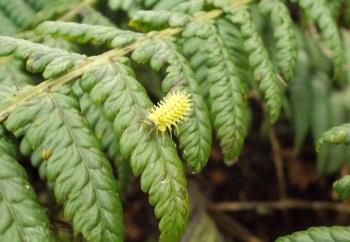 The Spiky is an important flagship invertebrate, representing many other endemic species, and the precious Peaks which it calls home. The endemic golden sail spider is frequently seen during Spiky surveys and rare ferns are present in their habitat. By providing and protecting habitat for the Spiky, we will be providing a home for many other species, plants, invertebrates and more.

The Spiky has been the focus of a 2 year project, coming to an end in 2017. It is partnered with the RSPB, Buglife, and St Helena Governments EMD, and supported by the Darwin Initiative. Other international stakeholders include the Zoological Society of London and Bristol Zoo. The project was designed to protect the remaining populations of Spikies, to learn more about where it lives and what it needs to survive, as well as restoring an area of its cloud forest habitat. Through our work on the Spiky we hope to protect it, and its habitat, for generations to come.