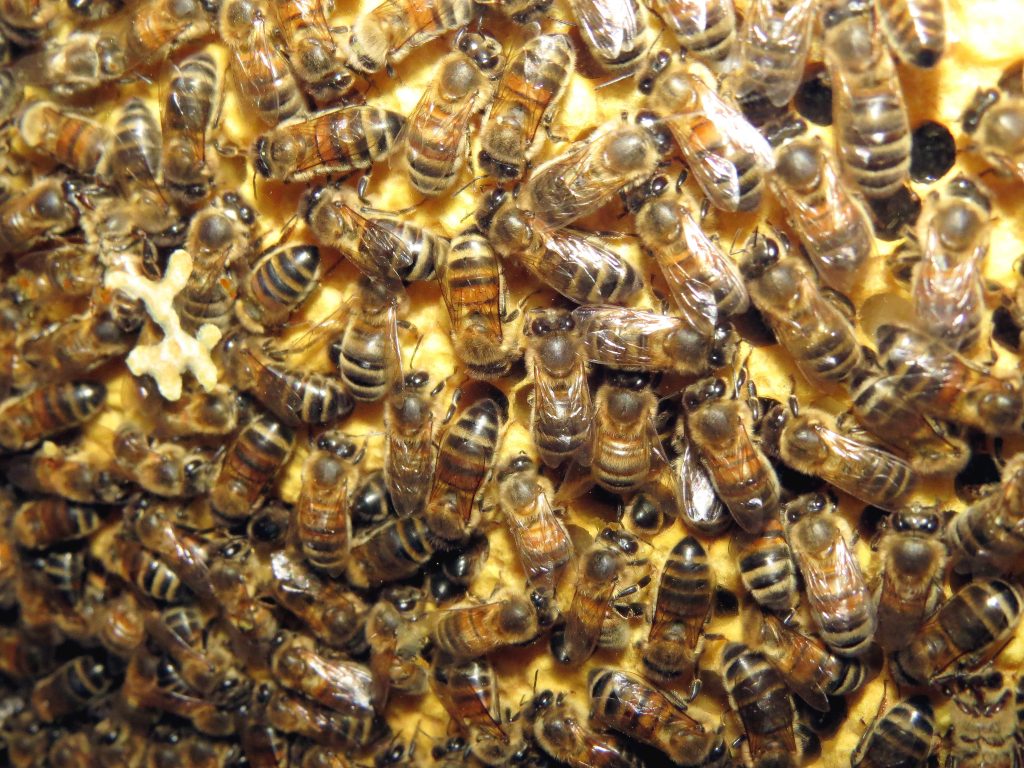 Contrary to a popular belief, adding more honeybees is not the answer to pollinator declines. In fact, it may do more harm than good.

What animal do you think of when pollinators are mentioned?  It is probably not a fly, a wasp, a moth, or even a wild bee.  It is most likely a honeybee.  Well, certainly that is our experience with the press and media, in their eyes  pollination is all about honeybees.  Stories about pollinator declines are illustrated with pictures of honeybees and beekeepers, and well-meaning pollinator conservation projects focus on increasing the number of honeybee hives in our towns, cities and  countryside.  So, is this helping pollinators or could it be missing the point?

Pollination is about so much more than honeybees – there are estimated to be more than 4,000 species of insects in the UK that pollinate our crops and wild plants.  There is growing recognition of the importance of our wild pollinators, alongside mounting evidence that they are in serious trouble.

The Western honeybee (Apis mellifera) provides highly valued pollination services for a range of agricultural crops, especially where there is a lack of wild pollinators, or where large numbers of bees are required to pollinate monocultures of mass flowering crops.  Honeybees also provide us with honey, beeswax and other products, so their economic contribution to humans is significant.  Honeybees are able to cope with domestication, they can live in artificial hives – allowing us to easily access their honey and wax.  The hives can also be moved easily enabling honeybees to be transported to crops needing pollinating.  Honeybees can live in a range of habitats and are able to feed on a wide range of flowers – they are often described as a cosmopolitan super-generalist.  For all of these reasons the honeybee is an important insect, it has been domesticated, and it has been transported around the world by people – they are present on every continent, except Antarctica.

However, there are hundreds of thousands of other species of insects that are also pollinators – these include wild bees such as bumblebees and solitary bees, flies, butterflies and moths, beetles and wasps.  Yes, the next time that someone asks you “what’s the point of wasps?” you can tell them that they are pollinators!  Many of these pollinating insects are specialist species (ones requiring a narrow range of flower types to feed on, or habitats to live in), and many plants are only pollinated by these specialists.  Cocoa is a good example (albeit not a crop of the UK) – it is pollinated by flies – midges to be more precise.  Some flowers, such as tomatoes, can only be pollinated by bumblebees. And, if you do not have the right pollinator, you are not going to produce your crop.  So to have a balanced, healthy environment we need to have our full range of natural pollinators, we cannot just rely upon honeybees.

Given their economic importance, you may be surprised to find out that there is very little monitoring of the health of our wild pollinator populations.  The UK Pollinator Monitoring Scheme (PoMS) will go some way to improving our data and understanding, however we will need a few more years worth of data before any analysis can be undertaken.  So we largely rely upon surveys and monitoring of more conspicuous species like butterflies, moths and bumblebees, and on the distribution data that is collected by specialist recording schemes.

The results are extremely troubling.  We are seeing a reduction in the abundance of pollinators, and the diversity of pollinator species.  Increasingly, pollinator assemblages are becoming dominated by a reduced number of widespread, generalist, more mobile species.  The more specialist and less mobile species are suffering the greatest declines, and in many cases becoming locally extinct.  The trends are similar amongst a range of insect groups from butterflies and moths to hoverflies and wild bees.  If our pollinator populations are not cared for they can become damaged, depleted and cease to function.

A small number of unfussy and pollutant-tolerant species are able to cope with the damage that humans are doing to our planet.  These hardy species are replacing the rich diversity of specialist species that make up the fabric of life on Earth. No one factor is to blame entirely, but the four main causes of insect declines are: habitat loss, pollution, introduced pathogens and non-native species, and climate change.

Honeybees are affected by many of the issues which are harming our wild pollinators; they suffer when there aren’t enough wild flowers to collect nectar and pollen from, they can be poisoned by pesticides, and they are susceptible to disease.  The Western honeybee is probably extinct in the wild in Europe, certainly in the UK; while wild honeybees lived in our medieval forests, and occasional colonies can still be found, these are now probably escapes rather than a wild population. The conservation of African wild honeybees is, and any remaining European wild populations would be, a conservation priority, but domesticated honeybees are not in decline – they are probably the most numerous bee on the planet – definitely not a conservation priority.  Efforts by beekeepers to conserve ‘native’ honeybee genotypes in captivity are laudable, but as yet it is not clear if it is possible to identify the animals they need to maintain, whether specific genomes can be conserved in modern landscapes, or if captive honeybees are any more analogous to wild honeybees than domestic cattle are to the wild Auroch. On the other hand many of our wild pollinators are declining and at risk of extinction.  In a recent study of changes in distribution of 202 British bee species, 93 species of wild bees were disappearing, but the honeybee was the third fastest expanding species, its distribution apparently spreading by 5% a year between 1971 and 2015.

While honeybees are sometimes used a proxy for pollinator populations and the health of the countryside this is problematic.  At a ‘population’ level the numbers of hives is directly related to the number of beekeepers and the effort they put into sustaining their hives.  This can include using pesticides to rid hives of parasites resulting from overcrowding and the international trade in infected honeybees, and feeding honeybees with sugar water to bolster their ability to overwinter.  Their large colony size and honey stores also mean that domesticated honeybees are more robust to environmental shocks and pesticides when compared with bumblebees or solitary bees.

A further complication is that there is growing evidence that honeybees can pose a threat to wild pollinators.  Increasing the number of honeybee hives vastly increases the number of individual bees in an area – a hive can support between 30-40,000 honeybees in the summer.  By increasing the number of individual bees in an area you also increase the competition for the flower resources, and this puts pressure on wild bee populations.   These competition effects can be measured 600-1,100m from the hive, over six months a single hive will use the resources that would otherwise have supported 200,000 wild bees, and the disrupting effect of honeybee hives on pollination services can have “serious negative impacts on biodiversity”.

Honeybees can also transfer disease to wild bees, which impacts on the health and survival of individual insects and has ecosystem wide community level effects. .

The increase in honeybee populations has been much greater in urban areas, with potential negative impacts on wild pollinators.  In central London, for example, the density of honey bee colonies exceeds 10 hives/km2 (with locally more than 30 colonies/km2) – more than twice the European mean (4.2 hives/km2) and nearly eight times the UK mean density (1.3 hives/km2).  It has been estimated that 0.83 hectares of lavender are needed to support one honeybee colony, which of course does not take into account sessional flowering (i.e. a whole season is needed to support the colony).  The greenspaces of London, and other urban areas, are not carpeted with lavender or other sources of nectar and pollen, and the area of London greenspace required to support one honeybee colony has been estimated at 13.28 hectares.  The same study found that beekeeping based on current data is unsustainable in most parts of London.  Adding more hives to city-centre rooftops or parks puts pressure on a system which is already stressed.

That does not mean that beekeepers and bee conservationists don’t get on, we often have common agendas – for instance the British Beekeepers Association is a Buglife member organisation and the two charities often work together to protect all bees from pesticides and to make sure there are more flowers in the countryside for them to feed on.  Indeed wild honeybees nest in hollow trees, a threatened habitat for many endangered insects across Europe, more standing ancient and veteran trees would help them all.

However, too much focus on honeybees ignores the thousands of other creatures essential to a functioning ecosystem.  By concentrating attention on honeybees there is a real risk that society misses the real crisis here – it is our wild pollinators that are in most urgent need of our help.  In addition, increasing the numbers of honeybees increases the pressures on our suffering wild pollinators and potentially disrupts ecosystems.

What can we do?  At Buglife we don’t want to discourage people from taking up beekeeping, it is a rewarding hobby and can be a great way to get people to think about pollination, bees and insects, but we do want to make sure that new hives are fuelled with new nectar.

We must be clear that an expansion in the numbers of honeybee hives poses real risks to our wild pollinators.  Whilst many people often think that installing a hive on the top of your office block, or sponsoring a local beekeeping project is helping to “save the bees”, in truth it is probably doing more harm than good.