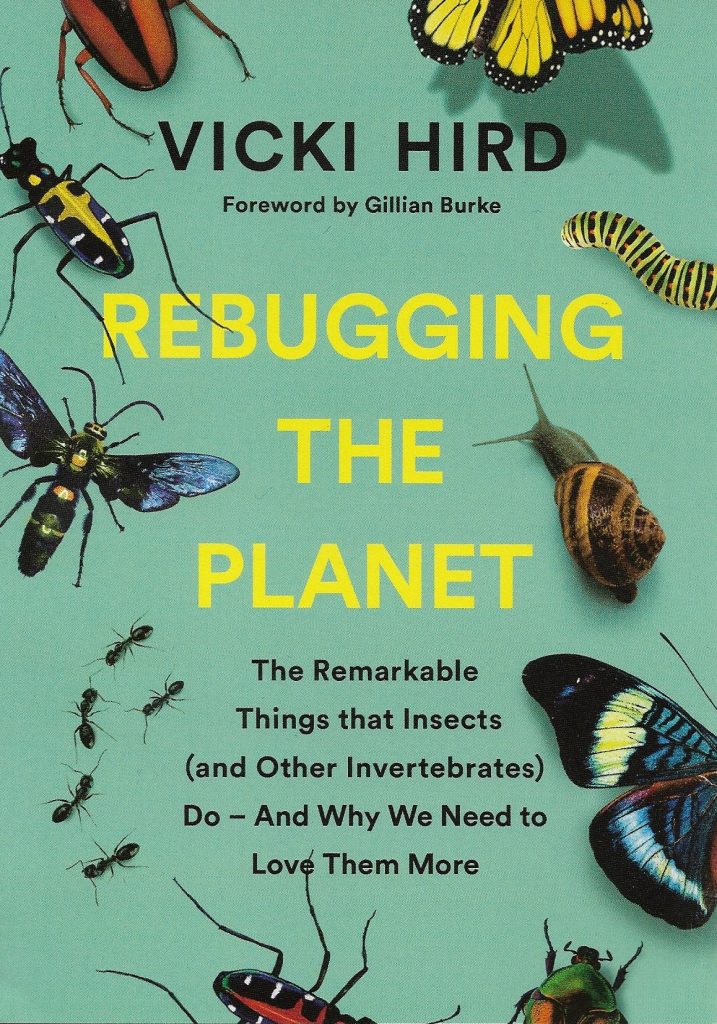 A guest blog from Vicki Hird BSc FRES author of Rebugging the Planet and head of the Sustainable Farming Campaign for Sustain.

Can you remember a time when you first became interested in bugs? My strongest memory is when I was sitting in a squat chair counting honey bees leaving their hive for a local research project investigating bee communications. I had an exhilarating, nerve tingling one-to-one with a bee who was suddenly angry with me. She landed on my face, her buzz changed completely and when she reached my nostril, I lost control, flapped about, and was stung. I retain a small scar and deep respect for insect communication skills.

Bugs of all sorts – not only insects – have always fascinated me and probably led to my 30 years as an environment and farming policy campaigner. The idea of a book on ‘rebugging’ came to me when new global research revealed some alarmingly huge crashes in insect numbers and diversity. Some data suggested 40 percent of insect species alone are at risk of extinction – under considerable threat from multiple sources including light and pesticide pollution, monoculture-based, industrial farming, habitat loss, plastic microfibers and climate change.

But I was inspired too by the new ‘rewilding projects’ – if we can rewild huge spaces, why not rewild the small places too and create the refuges, and corridors we know the bugs need in urban as well as rural areas?   Rewilding’ is about restoring often huge areas and reintroducing large animals like wolves and beavers. Fantastic. But I suggest the wood ant is as critical as the wolf- a keystone forest species providing vital services by way of its nest building, foraging and gardening habits. And worms and so many other species are at the heart of maintaining healthy living spaces. My book explains why we should do this. How bugs are so critical for all the natural systems we rely on – such as pollinating crops and trees (and its more than bees), pest control, waste and water treatment, recycling nutrients, ensuring healthy soils and seas and a vital food source for humans and many other creatures we love. Without the bugs, linking so many ecosystems together, we are lost.

A growing public curiosity in nature and in invertebrates is also promising. And whilst not many of us have a large estate to rewild, there are so many ways that we all can help the bugs help us – in our houses, window ledges, workplaces and gardens, through the food and clothes we buy (or don’t buy), how we work with local communities on green spaces and what we demand of local and national politicians and those with (often too much) power.

Research for the book led me to so many ways we can learn too from invertebrates. The social insects, living in large colonies, are astounding – the bees, ants and termites – their organizational and construction skills are so brilliantly designed. They create incredibly efficient air, moisture and temperature-controlled skyscrapers, hugely complex systems to communicate using chemicals, sounds, visuals and can manage huge ‘cities’ of millions of related insects across vast areas the size of Britain. The sheer complexities too of soil systems evolved with complex invertebrate, microbial and plant interactions which should tell us we know so little. And that we damage these vital few centimetres of ‘brown gold’ at our peril.

As I wrote the book, it became critical to talk about ‘rebugging our attitudes’- about understanding their role more, about what they do for us, and sharing that awareness rather than fear, especially with children. We’ve spent so long looking for ways to eliminate the nuisance bugs and fearing them, that we’ve forgotten to help the good ones – i.e. most bugs – and to share the love.

The beauty is that everyone one can re-wild, by rebugging their lives – with the smallest and wildest animals – the invertebrates. It all matters for nature, for the bugs and, most especially, for us.

Rebugging the Planet: The Remarkable Things that Insects (and Other Invertebrates) Do – And Why We Need to Love Them More (Paperback, forward by Gillian Burke, published by Chelsea Green, out now). See www.rebuggingtheplanet.org and follow vicki on twitter and instagram @vickihird.