Buglife believes in fairness and justice.  We believe that having space on the planet for the other species that live here is fair, and we believe that humans have a responsibility to secure sufficient space for the survival of other species.  Unfortunately the legal processes that enable people to protect the environment are under sustained attack.

When something is very unfair and the well-being of a person, an organisation, or of wildlife is seriously jeopardised then we want to see justice done.  We want a fair outcome that does not discard, abandon or misappropriate the rights, property or other requirements of any party.

It is a basic right that people should be able to challenge decisions taken by powerful bodies when they believe that the decision is unlawful or unjust.

Buglife is an advocate for endangered invertebrates where their homes are threatened with destruction by inappropriate planning decisions, when pesticide regulators fail to apply legally required environmental safeguards and in numerous other cases where the activities of others threaten to cause serious environmental harm.

For Buglife to properly represent invertebrates we have to have legal opportunities to hold governments to account through the law courts.  Similarly governments must be at liberty to take decisions that protect the rights and requirements of individuals, society and the environment.

There are currently two legal proposals that put in jeopardy the ability of society to protect the environment.  The detail can be complex, but the principles are straightforward and that is what I will explain here.

If you want to see less environmental degradation and destruction in the future it is important that you understand the seriousness of these threats.

The Government appears to have been persuaded by big business to try to crush the ability of the public to hold decisions to account.  At the end of 2013 the Ministry of Justice consulted on a range of draconian measures to make it much harder for people to challenge their decisions.

The Secretary of State Chris Grayling says that Judicial Reviews “act as a brake on growth. In my view judicial review has extended far beyond its original concept, and too often cases are pursued as a campaigning tool, or simply to delay legitimate proposals”.

However, the Government was unable to provide any reasonable evidence in support of these claims.  Indeed the only justification they can provide for freeing themselves from being held to account by the public in the courts is the increase in the number of Judicial Reviews – from around 4,300 in 2000 to around 12,600 in 2012.  However, the number of immigration and asylum applications more than doubled between 2007 and 2012 and made up 76% of the total applications in 2012, this is the root of the increase, not environmental protection. 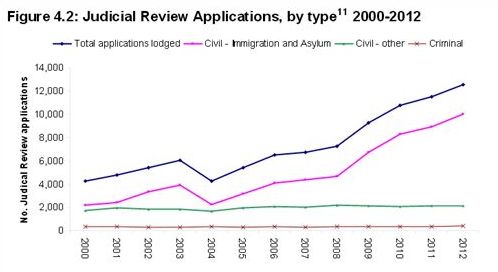 In response to the consultation hundreds of lawyers and NGOs clearly and firmly rejected most of the proposals:-

Fourteen charities under the Wildlife and Countryside Link umbrella stated that the data presented “does not support the Government’s case that further reforms (or indeed any reforms) in areas other than immigration and asylum are warranted – if anything, it demonstrates the proposals are wholly disproportionate”.

The Bar Council said “the proposals for reform …… will have the effect of inhibiting access to justice and weakening the accountability of the executive without achieving the aims of speed and efficiency”.

Leigh and Day Solicitors were particularly frank in their opinions – the proposals were “based upon a fundamentally flawed approach and misconceptions (whether deliberate or not) which undermine the proposals and in our view render them perverse” and “the changes to date, and these further proposals, are not driven by any objective problems with judicial review but by political ideology and an agenda which is inimical to a modern liberal democracy and the rule of law”.

Even the Civil Justice Council, a government funded Advisory Public Body with responsibility for overseeing and co-ordinating the modernisation of the civil justice system, was “extremely concerned at the nature and potential impact of these measures, which appear to have a very limited evidential basis.” “We do not agree with the suggestion in the consultation paper that JR has been hijacked by campaigners out to frustrate or derail public policy-making and economic regeneration.”

The Government response to the consultation was produced this week. It starts with a restatement of their misconceptions and a robust statement from Chris Grayling “I am satisfied both that there is a compelling case for reform and that it should proceed at pace”.  However, the detail of the Government response shows that it has clearly been rocked by the highly negative reception given to most of the proposals.  Some of the more draconian measures to restrict access to the courts have been dropped, while the more positive proposal to create a new specialist Planning Court will proceed.  There remain some concerning and counterproductive proposals, and Buglife and others will be working to halt these as the new Criminal Justice and Courts Bill progresses through parliament.

There are currently important trade negotiations between the EU and the USA.  As part of this process a mechanism was introduced into the discussions called an Investor-State Dispute Settlement (ISDS).  This is a provision in international trade treaties and investment agreements that grants an investing company the right to start dispute settlement proceedings against a foreign government in their own right under international law.

ISDS undermines democratic decision-making by giving corporations the right to directly challenge government policies and actions in private, bypassing domestic courts and creating a new legal system that is exclusively available to investors and multinational corporations.  ISDS also offers corporations a venue through which to challenge domestic court decisions, further undermining domestic decision-making.  In short, ISDS is a one-way street by which corporations can challenge government policies, but neither governments nor individuals are granted any comparable rights to hold corporations accountable – there is no access to this justice for the consumer or the environment.

The inclusion of an Investor-State Dispute Settlement in the currently drafted EU/US trade agreement would be the most significant use of such a mechanism to date, and it would make it increasingly difficult for national or EU bodies to restrict the use of any product on environmental grounds.

Buglife and other organisations across Europe wrote to the Commission in December expressing our concerns.

Fortunately at the end of January the European Commission announced it would be consulting the European public about the proposal and EU Trade Commissioner Karel de Gucht stated “Governments must always be free to regulate so they can protect people and the environment”. So there is hope that people power is turning the tide on this potential infringement of our liberties.

In both cases action by Buglife and others appear to have been effective in at least slowing the rising tide of corporate and Government power, but in both cases more work will be needed to ensure that we maintain, and indeed improve, the ease with which it is possible to use sound legal processes to ensure that bugs and our environment are treated fairly and are not destroyed by narrow and short term interests.