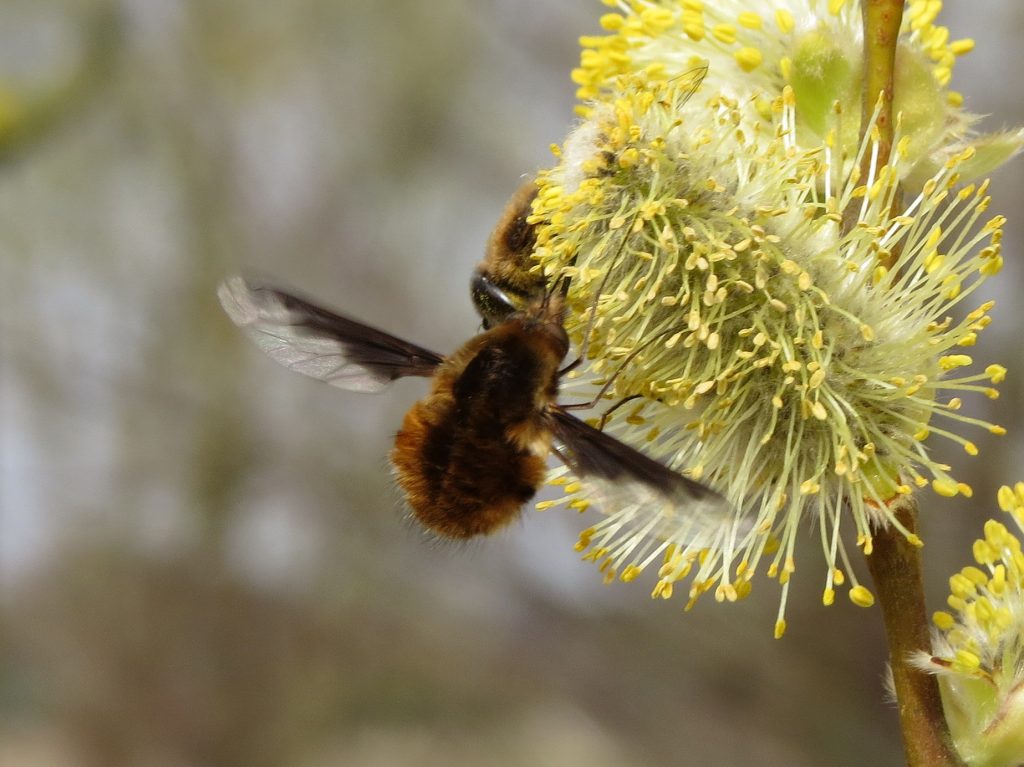 With its furry body, the Dark-edged bee-fly (Bombylius major) is commonly mistaken for a bee.  These distinctive furry flies are active from March to June in gardens and along hedgerows where they are often seen hovering over flowers and using their long ‘tongue’ (proboscis) to feed on nectar from deep flowers such as Primrose. Though this long proboscis may look intimidating, resembling a huge stinger attached to its face, it is used only for drinking nectar and the fly is in fact totally harmless – well, to us at least.

The Dark-edged bee-fly has a devious yet fascinating lifecycle. It is a parasitoid – ‘an insect whose larvae live as parasites which eventually kill their hosts’. It lays its eggs into the nests of solitary bees, where the bee-fly larvae (or ‘juvenile) prey on the developing bee larvae. More specifically, the larvae of the Dark-edged bee-fly attack the larvae of mining bees – spring-active, ground-nesting solitary bees that typically nest in colonies in the soil in grasslands, along hedgerow banks or even your flower beds and lawns.

Female bee-flies hover a few inches above mining bee nesting areas and flick their eggs indiscriminately onto the ground. Almost purely by chance, a small number of these eggs will land into or near an active mining bee nest. Once a bee-fly egg hatches, the larva crawls into the underground nest cell of a host bee where it waits for the bee larva to grow. Once the host bee larva is sufficiently large, the bee-fly larva attaches itself and starts to suck out the body fluids of the host, eventually killing it! Once the host bee larva is consumed, the bee-fly larva pupates and remains below-ground throughout the winter, eventually emerging as a fully-formed adult bee-fly the following spring, completing the lifecycle.

The Dark-edged bee-fly is the largest and by far the most frequently seen of our four bee-fly species in the UK, and is recognisable owing to the solid dark band along front edge of wings (wait until it stops flying to see this). Remain vigilant, however, for the Dotted bee-fly (Bombylius discolor) which is active at the same time of year (March to June) in similar habitats – for this species, look for dark spots on the wings (again, wait until it stops flying to see this).

Though the Dark-edged bee-fly is bad news for mining bees, there is no evidence that bee-flies cause any major decline in bees. Bee-flies and bees have lived side-by-side for many millennia, and long may they continue to do so. Keep an eye out for these fascinating creatures on warm, sunny days this spring and if you see one, try and get a photograph and consider submitting your record (further details on submitting bee-fly records, including a handy identification guide, can be found here).