The Slamannan bog restoration project has restored over 230 hectares of degraded lowland raised bog habitat in the Central belt of Scotland, with a focus on an area of the Slamannan Plateau called Fannyside Muir.

Fannyside Muir is a large area of peatland just west of the town of Cumbernauld in the Scottish Central Belt. The site has been subject to wide-ranging and long-term adverse management, including drainage for commercial peat extraction and historical afforestation.

Part of the restoration site is within the Slamannan Plateau Site of Special Scientific Interest and is designated as a Special Protection Area, as Taiga bean geese (Anser fabialis fabialis) use it as a winter roosting site.

With the help of volunteer work parties and specialist contractors, over 4,300 dams have been installed on drainage ditches to retain water in the bog and allow recovery of peat-forming Sphagnum mosses. Twenty-six hectares of the driest and most degraded parts of Fannyside Muir have been ‘cell-bunded’. This technique creates a landscape of shallow pools, a few inches deep, on the surface of the bog and blocks small ditches and cracks in the peat. Dragonflies and wading birds colonised almost immediately.  Over 30 ha of conifers and 54 ha of birch scrub and gorse were also removed to prevent damage to the bog surface which contributes to drying out.

Many invertebrates can be found on bogs including habitat specialists such as the Large heath butterfly (Coenonympha tullia) and the Bog sun-jumper spider (Heliophanus dampfi).  Other invertebrates found on bogs include the Heiroglyphic ladybird (Coccinella hieroglyphica), the Emperor moth (Saturnia pavonia), which is the UK’s biggest moth, and the Green hairstreak butterfly (Callophrys rubi). Lots of aquatic bugs can be found in pools and ditches on bogs including the Four-spotted chaser (Libellula quadrimaculata), the Northern emerald dragonfly (Stomatachlora arctica) and the Diving bell spider (Argyroneta aquatica) which will all breed in bog pools.

Four years of volunteer surveys and monitoring at Fannyside Muir has helped document the recovery of bog vegetation, monitor improvements in ground water levels, and record over 830 species on the bog, including key indicator species and at least 35 species of Nationally Scarce/ Scottish Biodiversity List/ Red Data Book invertebrates. 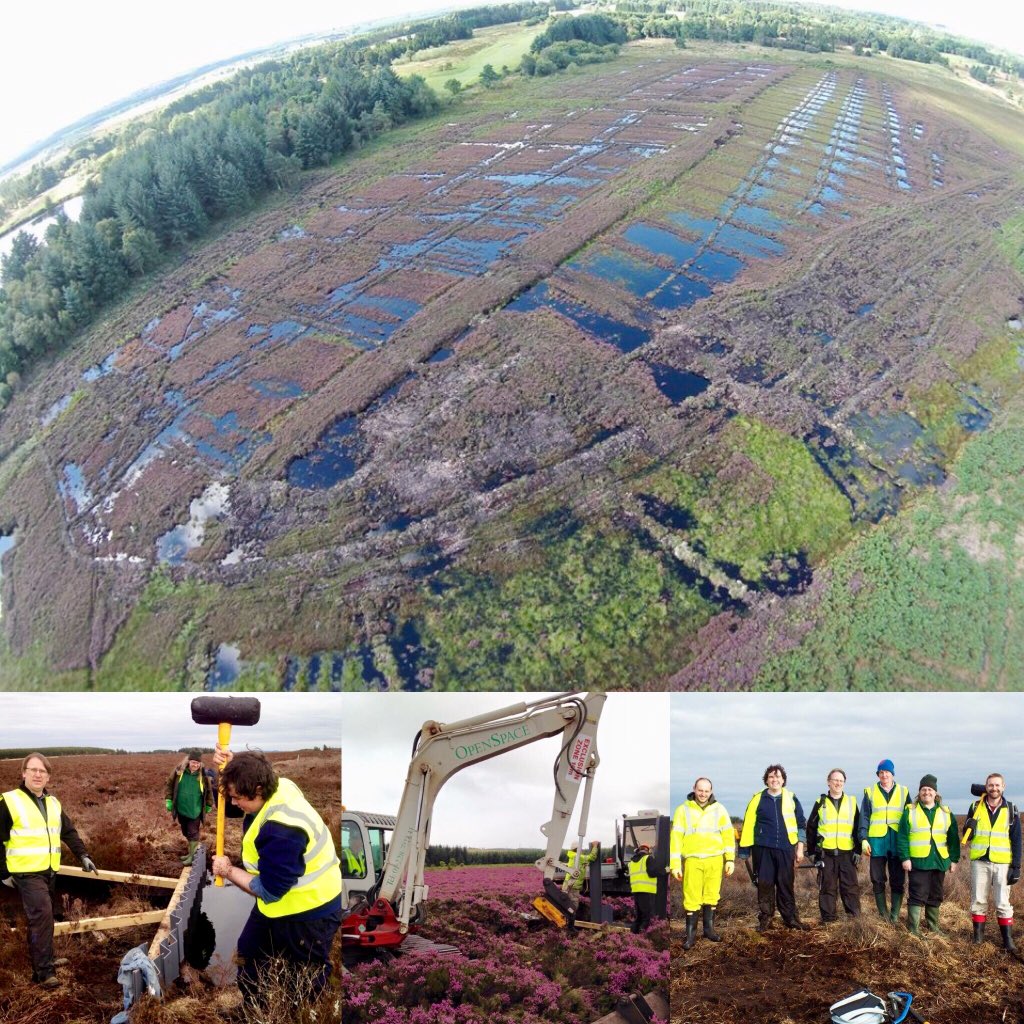 The project was built on successful bog restoration work undertaken by North Lanarkshire Council on a small area of Fannyside Muir. The Council’s work demonstrated that restoration work in the area was achievable and could have significant ecological benefits.

Through the Slamannan bog project, we have brought 230 ha of degraded lowland raised bog into conservation management, stabilised water levels across the site and stimulated the recolonisation of Sphagnum mosses and other bog vegetation.  Improving the connectivity of previously fragmented bog habitat at Fannyside Muir has benefited many species including Black darter dragonflies (Sympetrum danae) and the Sphagnum-associated ground beetle Agonum ericeti.